As most of you know, the Senate Republicans ran away at the end of the session to prevent the final vote on the Clean Energy Jobs bill (HB 2020). They fled over state lines, into Idaho and Montana, making the national and even international news in the process. After ten tense days of obstructing the legislative process, they returned to Salem. Why? Because, despite unprecedented opportunities for Oregon to reduce greenhouse gas emissions and invest in jobs and communities, they had successfully killed Clean Energy Jobs. But we are not defeated.

Sure, none of this went the way we wanted it to, but there is a bright side here—all of you. Because, when the Senate Republicans didn’t show up at the Capitol, you did.

Almost 1,600 of you attended Clean Energy Jobs roadshow hearings and lobby days, and showed up in Salem while the Senate Republicans were missing. You rallied on the Capitol Steps, and made your voices heard. You sent emails to your legislators demanding a healthy climate, and held them accountable face-to-face. You turned up in Salem day after day, and gathered in the Senate Gallery, where you gazed down at the eleven empty Republican seats as the floor session was gaveled in, holding them accountable, doing your part, day after day after day. 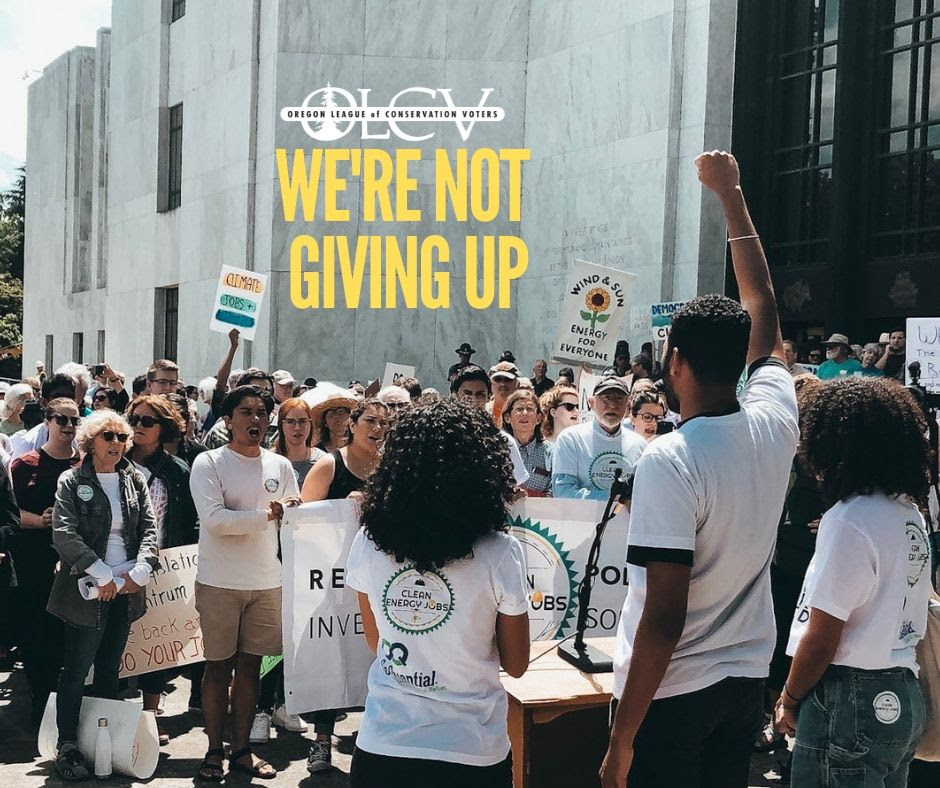 And, while the Clean Energy Jobs bill is still unfinished business, we had a lot of other environmental victories this year, thanks in large part to your activism. Together, you sent almost 30,000 emails—the most by far in OLCV history—about environmental issues to your legislators and Gov. Brown. And, all this hard work made a big difference.

We were able to pass some exciting bills this session, including two of our Oregon Conservation Network (OCN) Priorities for a Healthy Oregon—HB 2007, which helps commercial fleets upgrade to more efficient diesel engines, and HB 2209, which holds rail companies accountable for oil train spills.

Oregon’s waterways are now more protected, too, thanks to a ban on offshore drilling (SB 256), a five year fracking moratorium (HB 2623), and a statewide ban on plastic grocery bags (HB 2509). Our air and water quality will continue to be held to higher standards, as well, thanks to the Oregon Environmental Protection Act (HB 2250). Meanwhile, new zoning laws will allow for denser housing in our urban areas, reducing the need for fossil fuel powered transit and making our cities more walkable (HB 2001).

You also helped kill some really bad bills, including two of our OCN Major Threats. Thanks to you, Covanta’s waste incineration plant will not receive renewable energy credits for polluting our air (SB 451), and Oregon’s bottle bill will not be weakened to create a special exemption to current regulations (SB 892).

We want to celebrate these achievements, while also focusing on what needs to be done. Will you send a quick email to your legislators and Gov. Brown, thanking them for all the good bills that passed, and also urging future action on the Clean Energy Jobs bill?

As we’re regrouping for the next stage in the fight for Clean Energy Jobs, we need your commitment to keep fighting, now more than ever. The climate crisis is reaching a critical point, and we need to take action fast. This unfinished business won’t stay unfinished for long—we won’t let it. The climate can’t wait. The people of Oregon want climate action, and, together, we’ll make sure that our voices are heard.

P.S. Keep an eye out in the fall for the release of OLCV’s Legislative Scorecard, which will have all the environmental bills from session and how each legislator voted.